This parcel of land and adjoining conservation land is characterized by many small northeast-southwest elongated hills. The property has a dense mature tree cover interspersed with intermittent and permanent brooks with pocket swamps draining in opposing directions. Numerous bedrock outcrops and large boulders are distributed randomly throughout the site. The wooded areas display an interesting variety of deciduous and coniferous trees. A large eight-acre open mowed field is located on the west side of the site adjacent to Newtown Road.

Notable Features:
Fort Rock – A massive glacial age boulder, now split by thousands of years of weathering. The narrow passageway between the two large sections is a favorite place for children to play.

Farm Pond – A small attractive old farm pond with a small earth dam is located at the end of a one-way trail.

Bedrock and Boulders – Most of the rock observed at the surface is hard gray granite pegmatite, consisting of large nicely formed feldspar and quartz crystals with books of black sheet mica. The age of the rocks is estimated to be over 400 million years. Glacial ice flows occurring over 13,000 years ago were responsible for the current exposures.

Wildlife Corridor – The northeast-southwest orientation of the hills, valley, brooks, and ponds are indicative of an ancient bedrock sub-fault zone. The wooded elongated land features provide an ideal
passageway for wildlife migration, such as coyotes, deer, and fox.

Meadow – A well-groomed meadow occurs next to Newtown Road. Hawks have been sighted many times in this area.

Vernal Pools – “Shallow temporary ponds that appear in the woods and fields of New England in the late winter and early spring. They are isolated, ephemeral links between the ice and snow of winter and the drying heat of summer. They are veritable nurseries of life for many species of frogs and salamanders, as well as myriad forms of aquatic invertebrates that can endure long drought between
summer and the following spring. They are easily one of the most important ecological features in the New England landscape.” – From “The Pools of Spring” by Thomas Conuel, Spring 2010 Sanctuary
Magazine, the journal of the Massachusetts Audubon society.

There are four interconnected trails, two of which begin at the parking area. A map of the trails is available at the kiosk. The trails existed prior to the purchase of the property in 2009, and are easy to follow. Signing and trail marking has been completed. Some of the trails are old dirt farm roads and are generally wider and easier walking than the remainder. Two of the trails are connected to other properties and end at University Drive, off Shaker Lane. One trail connects to the Cobb Memorial Forest. Another trail connects to the Morrison Orchard Extension land (owned by the Town). At the terminus of the Morrison Trail at Nagog Hill Road, a trail through private property extends through a forested section of the Nagog Hill Orchard to Nashoba Road and Sarah Doublet Forest. The variety of trails in the area provide hours of walking in the woodlands all the way into the Sarah Doublet Forest.

The land is located on the east side (left side going toward Acton) of Newtown Road, south of the intersection with Shaker Lane.

Plenty of parking is available in a field, at the opening in the fence, which extends along the roadside. The opening is visible near the highly visible information kiosk. 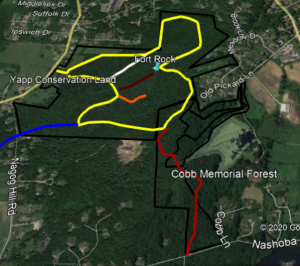