The Cloverdale parcel consists of open lightly wooded rolling terrain and an open pasture surrounded by mature pines on the westerly side and wet meadow on the northerly side. The easterly side is mostly wooded and brush covered. A gentle trail winds around the perimeter of the property providing nice views of the meadow and the abundant wildlife that resides within.

This area is a pleasant location for a short walk or to cross country ski or snowshoe amongst the woodlands.

A gentle trail meanders through the property providing nice views of the meadow and the abundant wildlife that resides within. This loop trail, approximately .60 mile long, winds along the edge of the pasture and around the southwest edge of the meadow before it turns into a more densely wooded area along the easterly side of the property. The trail eventually reaches the edge of the woodland where it crosses the meadow. The view from here overlooks eleven acres of meadow which stretches approximately 1600 feet from the northern to the southern edge of the property. The trail then crosses the six hundred foot wide meadow and returns to the pasture area. Wet areas of the property are accessed by a short bridge across the inlet stream and four boardwalks of varying length.

The longest boardwalk, at 370 feet, provides up close views of a multitude of birds and occasional glimpses of otters and muskrats as it crosses the meadow.

Primary access to the loop trail is at the parking area on Great Road. Additional access is planned via spur trails leading from Gristmill Road and Surrey Road.

The twenty acre Cloverdale property was donated to the Town of Littleton when the Apple D’Or neighborhood was developed. It is located on the eastern end of town bordered by Great Road on the west, Grist Mill Road on the north and south, and Surrey Drive on the east.

The property was previously owned by Irish immigrants, John Mannion and his wife Julia, who began farming here in the 1870s. Their dairy farm, called Cloverdale Farm, was passed down to the Mannions’ son Thomas, and his wife Katherine, who continued operations until the 1950s.

The pastureland was once surrounded by apple orchards which stretched up the hillside to what are now Grist Mill and Surrey Roads.

Route 2 (Great Road), an old stagecoach road, ran through Littleton past Cloverdale Farm. It was a main thoroughfare to the northern and western parts of Massachusetts until a new four lane road was constructed from the Concord Rotary to Fitchburg between 1950 and 1953. That section of the new Route 2 in Concord and Acton follows the path of the older two lane Route 111. The Littleton section of the old Route 2 became Route 2A.

Originally, Route 2 / Great Road followed the path of what is currently known as Mannion Place. In the late 1930s, the State of Massachusetts relocated the roadway to its current line of travel. Unfortunately that action cut Cloverdale Farm in half. Cloverdale’s cows were housed in the barn on Mannion Place. In order to safely transport the cows to pasture across the road, a tunnel was constructed under Great Road. The “Cattle Walk” tunnel, one of Cloverdale’s unique features, remains in very good condition. It is located on the southern end of the property.

Eventually the land was taken over by beavers whose dam at the lower end of the property created a flooded pond area killing many of the surrounding trees. The eastern side of Cloverdale still has many standing dead trees which provide a wonderful habitat for Tree Swallows, Woodpeckers, and other cavity nesting birds. 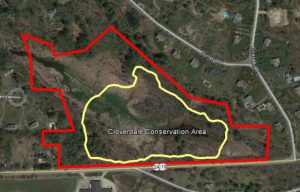