On Thursday, November 16th at the Littleton High School Auditorium, the Littleton Conservation Trust hosted a crowd for our Annual Meeting, followed by a multimedia presentation by e-Awakening which highlighted the Bay Circuit Trail, a 230 mile emerald necklace path through Massachusetts between Duxbury and Plum Island in Newburyport. 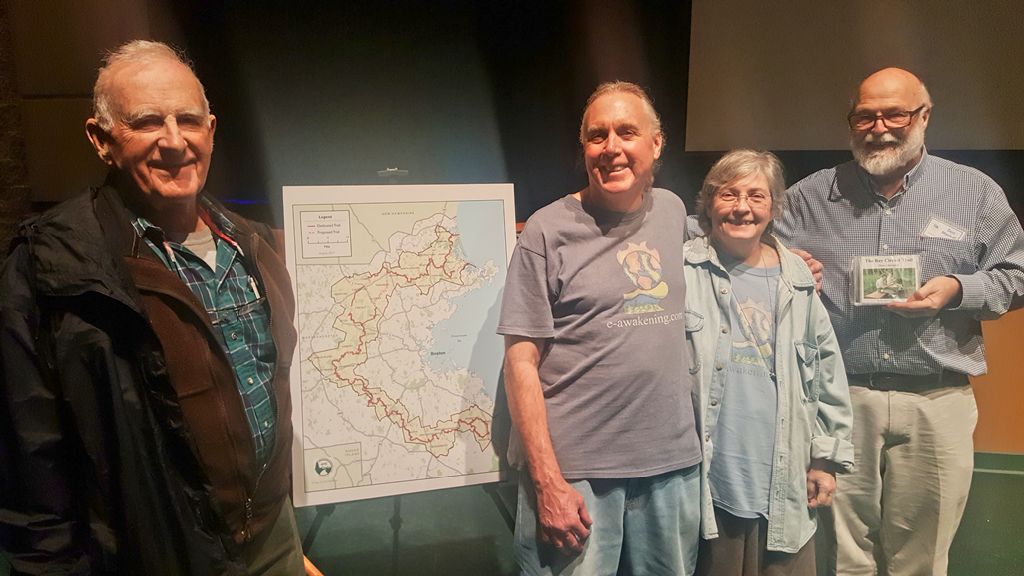 A lively presentation transitioned smoothly from live music, to speakers, to video poetry montages of time spent building and traversing the Bay Circuit Trail. Dan and Marilyn Brielman are a husband and wife team that make up e-Awakening, which is short for “Environmental Awakening” – they believe that there are positive stories to be told which can both inform and inspire audiences to preserve and protect nature and the natural resources around each of us. They were joined by their friend and collaborator Al French, who has spent more than 25 years of his life on the vision, advocacy and execution required to make the Bay Circuit Trail a reality that now crosses 50 Massachusetts towns! Originally conceived more than 100 years ago, the path meanders along a wide arc roughly between modern day routes 128 and 495.

The presenters spoke about “Environmental Heroes” – those that made the Bay Circuit Trail possible, but also many different kinds of Environmental Heroes – those that work tirelessly to conserve land and resources, those that have the vision to minimize the impacts of necessary development through creative local collaboration, those that are spreading the word today via education, video, photography and social media, and even those in the audience that were listening – becoming environmental heroes through engagement and learning about how they can help at any level within their reach. According to Mr. French, previously the Chairperson of the Bay Circuit Trail Alliance, more than 4,000 acres of land has been conserved due to local advocacy associated with the Bay Circuit Trail. Then he inquired “What about the next 4,000 acres?”

In attendance were Westford Conservation Trust’s Bill Harmon and Emily Teller, an active member of the Bruce Freeman Rail Trail Project. Ms. Teller spoke about how the Freeman Rail Trail extension “2a” will open next spring and also serve as an important connector on the Bay Circuit Trail as it extends from Chelmsford, through Westford and on to several miles through Acton, where you may have noticed its new flyover bridge on Great Rd. / Rt. 119.

At the conclusion of the meeting, e-Awakening presented Littleton Conservation Trust’s President, Donald Maciver, with a DVD copy of their Bay Circuit Trail presentation for inclusion in the collection at Littleton’s Reuben Hoar Library. The DVD will be available for circulation to the public and will likely be broadcast on Littleton Community Television as well.

Prior to the presentation, Littleton Conservation Trust held a brief annual meeting, which was open to the public. Mr. Maciver summarized achievements during the past year, a financial report was presented and accepted, and a new slate of Trustees voted in. One trustee position remains open and a new Treasurer is sought. If interested in serving, contact LCT.

Join our email list to be notified about future presentations, guided walks and other conservation news and events in and around Littleton.