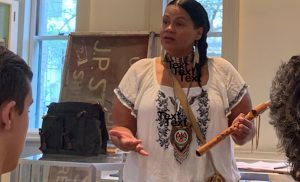 No doubt, most of us are familiar with one of Littleton’s largest conservation areas, Sarah Doublet Forest. Its woodlands and trails are spread over 96 beautiful acres. But, how much do you really know about the rich history of this area?
Please read the following article to learn more.

On Saturday, Nov. 16, from 1 – 3 p.m., Freedom’s Way will host a Connecting Communities Walk and Talk at the Sarah Doublet Forest in Littleton, in honor and celebration of the Women’s Vote Centennial, Native Heritage Month, and women who have impacted America.

Littleton was originally the Praying Indian Village of Nashobah Plantation, a fourmile square of land. Nashobah—or more correct, Nashopee—means “between the waters” and it was the primary seat of Sagamore Tahattawan of the Massachusett Nation. Upon Tahattawan’s conversion to Christianity in the early 1650s, Nashobah Plantation came into being in 1654 with the aid of the Rev. John Eliot.

Tahattawan’s village is located at Speen’s End, the northern end of Fort Pond, so called for the fort the Nashobah tribe built to protect themselves from Mohawk raids. The adjacent Sarah Doublet Forest is part of the Village area and is also the heart of the ceremonial stone landscape.

Sarah Doublet (Wunnuhhew) was an Indian princess, the daughter of Sagamore-John, the Chief of the Wamesit Praying Village (Lowell/Chelmsford). She married Chief Tahattawan’s son John Tahattawan, who later became chief of the Nashobah tribe. Sadly, John passed away at an early age, and their young son was killed by renegade militia in Chelmsford during the English-Indian war of 1675-76. It is unknown if
Sarah was interred on Deer Island with the other Nashobah Praying Indians during the war; many died there of starvation and exposure. Unlike most of the Nashobah who relocated to Natick Praying Indian Village after the war, Sarah and her new husband Thomas Doublet (Nepanet) chose to stay in Nashobah with a few others, including James Speen.

Nashobah Plantation was sold to the English piecemeal over the years and became the English town of Nashoba in 1714, renamed Littleton in 1715. As part of the incorporation, the General Court ordered 500 acres in the southeast corner of town, to be called the Indian New Town, be set aside for the remaining Nashobah. When Sarah, purported to be the last of the Nashobah, passed away around 1736, this land went to her caretakers, the Jones brothers of Acton. The Sarah Doublet Forest is the only public land at the heart of the Village, and the Littleton Conservation Trust is its steward.

The good news is the Nashobah Indians are alive and well, and are still Praying Indians. We will be joined on our walk by Quiet Storm, the daughter of Chief Caring Hands, the Sagamore of the Nashobah-Natick-Ponkapoag Praying Indians. Quiet Storm is of the royal family and a descendant of Chief Tahattawan, and will talk about her Nashobah people and their Nashobah lands while we walk the spiritual heart of the old plantation together. She also has a family connection to Sarah Doublet herself through Chief Tahattawan and will speak about Sarah, as well.

Daniel V. Boudillion, Littleton historian and author, will assist leading the Walk and Talk with Quiet Strom and Don. Dan’s work focuses on Native Nashobah history and early Littleton history, and he has made a special study of the Sarah Doublet Forest.

This is a unique event, an opportunity to walk the land with the tribal descendant of the original Native inhabitants, and talk with the daughter of their current chief about times past, the world today, and times to come.
This article was written by Dan Boudillion.

Please join us on November 16th in welcoming Quiet Storm on her ancestral land.