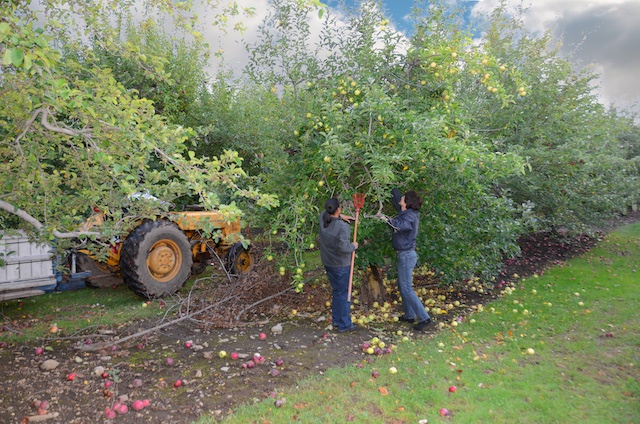 83 acres that include the orchard and buildings (with the exception of the house formerly owned by Mrs. Morrison) are leased to Nagog Hill Fruiters. The remaining acreage is conservation land split between two parcels (note that the orchard is restricted – it is not land that is open for the public’s use):

The Nagog Hill Road parcel is the area below the former Morrsion home and the small orchard. This is a southeasterly facing slope that has been mowed for many years. It is bounded by Nagog Hill Road to the east; Mrs. Morrison’s lot to the north, west is the tree line, and a small apple orchard to the south. Along the road frontage there is a stone wall with red oaks and poison ivy. The slope has an even, gentle grade and is covered primarily with grasses. The grasses are invaded with violets, hawkweed, crow’s foot, everlasting and mullein. The tree line includes red pasture juniper, red maple, black birch; walnut, rose, wild strawberry, blueberry, barberry, rattlesnake plantain, poison ivy and rhododendron.

A second parcel (Nashoba Road) is a wooded slope across from the entrance to Sarah Doublet Forest. This is a west facing slope with a wet swale along the road frontage. A stone wall bisects the wooded area. Trees include hemlock, elm, white birch, black birch, hickory, red maple, white pine, red oak and beech. The under story growth is dominated by saplings of the tree cover. Shrubs observed are raspberry, blackberry, poison ivy (covering many of the trees), bittersweet (several large growths covering the trees), honeysuckle, barberry, dogwood and rose. Herbaceous layer shows horsetails, skunk cabbage, sensitive fern, cinnamon fem, lady fem, poison ivy and Canada mayflower. This larger parcel is exceptionally important, as it provides habitat and a safe migration corridor for the diverse mammal population. This wooded parcel, which is threaded by numerous small drainages from the orchard, is itself a vibrant and valuable “edge”‘ habitat, because it is bordered on one side by orchard. A connector trail starts from Nashoba Road across the road from the Sarah Doublet Forest Road and passes through the parcel to Nagog Hill Road and then connects to the blue dot trail on the detached parcel.

The Town has designated Nashoba Road and Nagog Hill Road as scenic roads because of the spectacular views and natural character of the area. The property had been beautifully cared for over the years by the Morrison family, whose adoption of integrated pest management in their orchard operations has further protected the ecological value of the site.

The site has a rich geological history, with many interesting glacial landmarks. Is it a local epicenter for earthquakes, a fact well-documented in Native American cultural history of the region. The Nagog Hill Orchard is the last remaining commercial apple orchard in Littleton. Apples have been central to Littleton’s identity, with apple blossoms at the center of the Town’s seal. Nagog Hill Farm is at Littleton’s heart, in terms of its incredible beauty, bountiful harvest, watershed protection, and enlargement of adjacent conservation lands.

Off Nagog Hill Road, across from Lake Nagog. The parking area is surrounded by split-rail fence. There is space for seven cars. The Dr. Ed Bell trail starts here and enters Sarah Doublet Forest.

The Blue Dot trail passes through a detached, Town-owned 24 acre parcel. This rectangular- shaped land is located on the east side of Nagog Hill Road. It is bounded on three sides by stone walls. The land consists of woodland, small swamps, intermittent and permanent brooks, springs, vernal ponds, bedrock outcrops, and large boulders. The trail follows the old road from Nagog Hill Road, near the south side of the property, for about 2000 feet. The last 200 feet proceeds through the woodland to the stone wall boundary. Here it connects to the Cobb Memorial Footpath (for more information, see the section on the Robert and Emily Cobb Memorial Trail).

At the parking area off Nagog Hill Road is access to the Dr. Ed Bell Trail, indicated by blue markers. For more information about this trail, see the description of the Sarah Doublet Forest.

Littleton, long a center of apple production, has but one remaining working orchard, Nagog Hill Orchard. The cultural history begins long before apples, however.

The property is the site of a 17th century Native American village called Nashobah, or “between two waters”. There are indications that apple growing on the site dates back to the 1600s. The 16 Square mile Nashobah Plantation was formally granted to the Native Americans (who had long lived there) by the General Court in response to their conversion to Christianity. Despite enjoying private property rights, during King Philip’s War, the residents of Nashobah were forcibly removed to Deer Island. Few survived the return to Nashobah, but among them was Sarah Doublet, who died in 1736, under the care of two Concord merchants. In exchange for her care, she granted the Jones family 500 acres, the last remnant of Nashoba Plantation. That land transfer marked the last Native American land tenure in the region. In 1990, two elderly women granted the 98 acres abutting the present orchard to the Littleton Conservation Trust which named the tract the Sarah Doublet Forest. For more information, explore the Historical Society records and read Trespassing by Littleton resident, John Hanson Mitchell.

Nagog Hill Orchards was a popular pick-your-own operation for many years prior to the death of John Morrison. With its high-quality fruit trees, exceptionally well-maintained grounds, and scenic views, this large tract of land flourished under the stewardship of the Morrsion family. Historical data dates farming on these lands as early as 1672. Nagog Hill Road was then known as Cash Road. Through the 1930’s this fruit land was an active traditional New England farm. Fresh milk and vegetables were sold locally until John Morrison began the awesome task of clearing land, digging irrigation ponds, rebuilding the main barn and outbuildings, and began the voluminous planting of fruit trees. By the mid 1970’s, this large tract was converted solely to fruit trees and vegetables. Upon his death, the orchard closed its retail operation and sold only wholesale fruits to local marketers.

The Town of Littleton purchased the Nagog Hill Orchard in 2000. This apple and peach orchard was the last active, commercial orchard in town. It was acquired from the estate of John Morrison. The town received partial reimbursement of the total cost through the Commonwealth of Massachusetts Self Help Program and the Agricultural Preservation Restriction Program. The retail sale of apples, peaches and other orchard fruit is in operation now by Nagog Hill Fruiters.

Do not enter the orchards or buildings without permission.